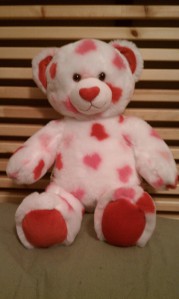 Everyone, Hope. Hope, everyone.

Does anyone know what in the hell was going on at Kenwood mall this Saturday?  Was there some huge sale going on?  Was it the “Please come out and shop because the economy sucks and we need some business and let’s face it, it’s the middle of January and you weren’t doing anything anyway” sale?  Because that place was packed like it was the week before Christmas…and it was the only mall in America.  You would have been hard pressed to tell that there is a recession going on at Kenwood mall.

Normally I would have just turned around and went home after Jesy and I went up and down at least four isles to find a parking spot.  I’m just not that patient when it comes to mall parking.  Nine times out of ten I don’t want to be there anyway, so why would I put that much effort to find a parking spot three zip codes away?

But it was a special day.  Today was the day that both Jesy and I felt like we could handle going to the Build-A-Bear Workshop at Kenwood to make the stuffed bear that we had planned on making for our child.  You see, before we heard the heart beat for the last time (wow, that was tougher to type that I thought it would be) we went to Build-A-Bear and bought a recorder and took it with us to the appointment to record the heartbeat. Our plan was to then put it in a bear for our baby.  I must admit this was not my idea, I stole it from a co-worker who suggested it.  So, before everything blew up, we had recorded the heartbeat and for the last two months that recorder just sat in the original bag that we bought it in collecting dust.  As a matter of fact I hadn’t even listened to it since that day, couldn’t.

Sooooo, yeah it was worth the Everest-like hike from Scooby Doo 17 to the mall entrance.

Harder than I thought.  I’m an unconventional thinker sometimes and I like to mix it up.  I thought the rabbits they had were very cute and didn’t feel like going all main-stream with this.  But, Jesy hates rabbits because she had a real rabbit when she was younger and it was mean apparently.  So the rabbit was out.  I liked the wolf that they had, it was a special WWF (World Wildlife Foundation, not wrestling) that would be replaced by another animal in the coming months.  But the way it had to sit didn’t make it very cuddly.  Dear God, I just used cuddly and cute in the same paragraph, this is getting dangerous.  So two strikes so far.  Jesy and I just kind of wandered around like zombies staring at the bears and other animals you could build not getting “that feeling” from any of them.  And of course I didn’t want to budge either about getting a traditional brown bear, it just seemed to normal for any kid of mine.

But then there it was.  A white bear with pink hearts.  Perfect for that little girl we had lost.  I mean if they had a frog it would have been an easy choice, but this bear was a fine substitute.  I can imagine a very young Jesy picking out this exact bear.

Once we had the deflated bear in hand it was time to get her all stuffed.  As we were waiting in line to get the bear innards I noticed that we were the only people in there without an ankle biter with us, I’m sure it seemed a bit strange to the employees there, because several times we were asked, “Oh, building a bear for your little one?”  Ummmmmmmmmmmmm.  Blank face. That was our response.  Pretty articulate right?  What do you say, how do you respond to that?  “Well Build-A-Bear employee that I have never met, let me tell you all about how we lost the baby that we had planned on building this bear for, and please excuse my wife’s tears right now as you have struck a nerve.  Thanks.”

I know it wasn’t their fault at all and they were just trying to make small talk as the machine filled the bear, but dammit I was really hoping to get out of here without Jesy having to even think about re-hashing that story verbally again.  I was prepared just to say yes to shut him up, but Jesy bravely told him a VERY Reader’s Digest condensed version.  He did the awkward shut up and looked down at the ground.

It was so easy, but I blanked.  Jesy was the one that came up with the name and it couldn’t have been more perfect.  I think she felt like she needed some hope, and Hope is what she got.

Jesy has slept with the bear both nights since bringing it home.  Even I rolled over this morning while Jesy was in the shower and hugged it.  I’m not sure that I will be brave enough to listen to the heart beat again anytime soon, but baby steps right?

It was a powerful and emotional day/weekend, but I’m glad we finally did it.  It was another necessary step in healing and moving on I think.