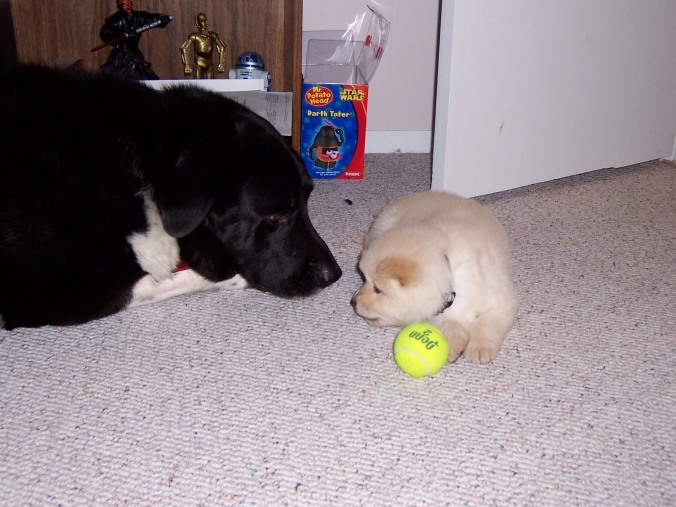 Monty and a young Carson. Monty was not pleased with this new annoyance!

Monday June 6th, one of my oldest friends passed away.  Monty, as true of a friend as you will ever find.

Monty and I have known each other since college.  The time in my life when I really began to figure out what kind of a man I would be.  He has been with me through heart break, true love, marriage, six different residences and countless number of nights when he was the only one that would listen.

Monty was a dog.  My dog, my first dog.  He was originally purchased, slightly reluctantly, by three housemates in college.  Myself, my co-writer at BattleForOhio.com,  Andy, and a mutual friend Jay.  The dog quickly became mine and Andy’s as Jay just didn’t quite have the patience for the destruction one puppy can cause.  Losing the deposit on the house after our senior year didn’t help matters either.  And after senior year Andy and I decided that it would be best for me to take Monty, so he became solely mine. Although he had been sleeping in my room, and going to the bathroom in my room, and destroying things in my room since we got him.

This would establish two things, I would be the primary care giver and that he would have to sleep in the bedroom.  Even later when he spent all his time at my parents he preferred to sleep next to the bed.  Sometimes even when the pain in his back legs was so great that he would stay on the same floor in the house all day, he would still struggle to climb those stairs at bed time so he could sleep next to the bed.

So as a special tribute to my old friend.  A friend that has known me longer than my wife even, I would like to share some special Monty memories. 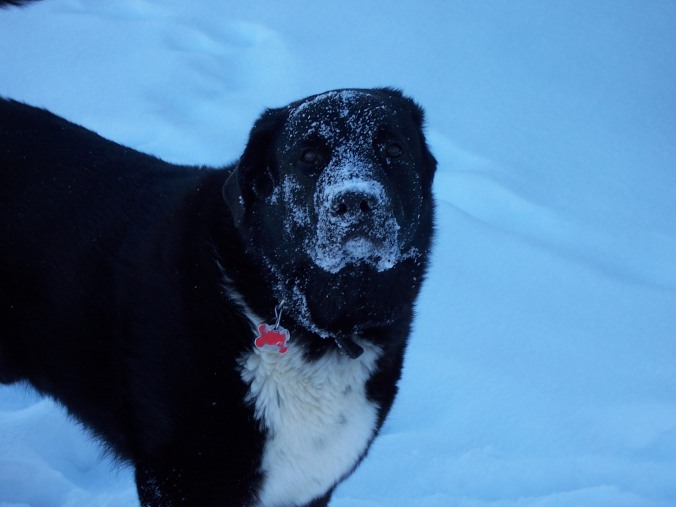 Monty after a romp in the snow.

He was a 100 pound gentle giant.  The only thing that was really scary about Monty was his boisterous bark.  He was only really grouchy with my mom, which was both funny and confusing.  Rub his ears or his belly and he was your best friend, except for maybe my dad.  Nobody was above my dad as far as Monty was concerned.  Mainly because my dad did what any grandparent does, he spoiled Monty rotten. And he was pretty open and blatant about it.  They might as well have been Riggs and Murtaugh or I guess more appropriately, Turner and Hooch.

If you had stock in Bounty, I would sell it right now.  Monty and his never ending stream of drool have kept paper towels at a premium in the Herron household for ten years.

Monty, you will get along great with Sam in Heaven’s dog park, but please be patient with Batman.  You remember how annoying Carson was?  Batman is similar, but he is a pretty dog, so he will be good with picking up the ladies, so you will have that going for you up there!  Good luck pal, I can’t wait to see you again.

Monty’s ashes will be spread in my parent’s backyard, a place that Monty loved to run around and chase anything from tennis balls to deer.  A backyard that must have seen 2 tons worth of dog crap and hundreds of gallons of dog pee.  A backyard that he called home.

There will also be two trees and a little stone memorial with Monty’s name on it in the front yard of my parents house.  Because death always gives way to new life and it was important to celebrate the life of a great dog and a loyal friend.