As a quick update, Abbey is already 7 months and is pretty much the happiest baby ever. She is a constant joy and entertainment to George and I with her squealing and screaming and beaming smile. 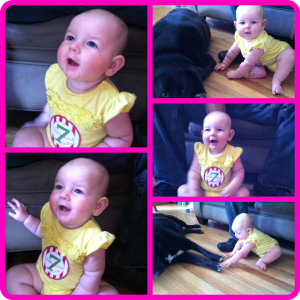 Abbey loves playing with her toys and is pretty good at keeping herself entertained on the floor with her big brother Housch keeping a close watch. We have discovered that she really doesn’t like carrots and paper plates (lol) but she devours sweet potatoes, her oatmeal and pretty much any fruit that we put in front of her. At this point there are no teeth visible and really no signs of them popping out anytime soon. Lots of drool but that’s been going on for a while now. We want Abbey to get used to a “sippy” cup so I introduced one last week that has a straw. Occasionally she’ll get some and she is quite proud of herself when she does however she doesn’t have this mastered quite yet and I think it will be a while before she does. I might try another type of cup without the straw as she does pretty good with taking little sips from my water bottle. 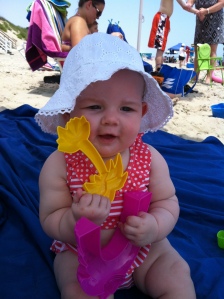 My summer baby has been sporting every bathing suit she owns (including her bikini <—–) and loved playing on the beach in North Carolina as well as playing at our local pool. Abbey attracts attention from all the little kids at the Sharonville pool including her buddy Sean this weekend. Sean and Abbey played for about an hour as Abbey watched Sean fill up and dump her pool bucket with water. George and I have to keep an extra close on our baby girl since she’s already flirting with the older boys! Of course Abbey loves her #1 man, her daddy! The only real “word” she knows and repeats over and over is “da” although she hasn’t associated the word with George quite yet. Whenever George says “da-da-da-da” to Abbey she just grins or flat out laughs at him. Something he should get used to! I’m still trying to get Abbey to say “mama” but the closest sound I get to this is “nommmmmm-a-nommmmmm” which is the sound she makes the entire time she’s eating (except when she eats carrots) her food. 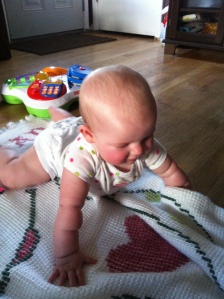 We think Abbey is close to crawling and has been positioning herself on her hands and knees quite a few times in the last few weeks. She started this while we were on vacation and I think it was because she was constantly on carpet. We added a comfy rug to our living room floor this weekend to help encourage her to crawl so crossing fingers we’ll be at this stage very soon (I’m going to regret this statement, aren’t I?). This means that George and I will now be crawling all over the house to see what shenanigans Abbey will be getting into very soon. Also a warning to the dog….look out Housh, if her squealing is any indication of her personality I’m sure she will be attacking the four-legged brother!

Abbey had her first experience with Rouster’s Blueberry picking this past Saturday. Actually, both George AND Abbey were there for the first time. I had so much fun introducing Abbey (and George) to the many customers that I see year after year and have gotten to know just through storytelling while they pick. 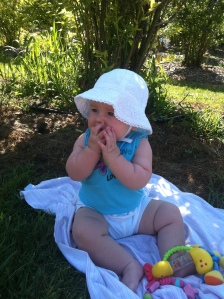 One customer in particular actually purchased Abbey an outfit and sent it to the hospital with my Uncle when Abbey was born. When I saw her this past Saturday she was elated to finally meet Abbey and was just so excited for George and I “to finally have a baby” after our loss with Hope. Others were just happy to play and coo at her and Abbey was just as happy to people watch and play on her blanket under the shade of a blueberry bush. George was on pond duty and took his job seriously, I think the Rouster’s want him back next week! There was even a celebrity siting this time, Anthony Munoz and his family were out picking at the farm.

One thought on “7 months young”