The first year of a baby’s life is quite far the most exciting (so I’ve heard) with many new things happening ALL-THE-TIME! You read about the first year developments and of course you are reminded of each stage at each pediatrician check up but experiencing it all is quite mind-blowing. Abbey has always been “on-track” with development but it literally seems like she went from being completely non-mobile to sitting up on her own, crawling, standing and now walking in about three short months. How does that happen? How can it go so fast?

Here is Abbey walking (toddling) the other night. I stopped the video short because she started to grab dog hair, which is a never ending battle at the house.

teeth are on the way. Items on Abbey’s favorite chew-toy list include;  her binki, teether ring, and her crib! OY, that child has been grinding and sharpening her teeth on the crib for weeks now and I really just don’t know how to get her to stop. Any ideas? It is so bad that I’m actively looking for bits of wood in her diapers! George thinks that she is part beaver and uses the crib to sharpen her teeth. I hope she isn’t planning to create a dam in the house.

Kisses by Abbey are pretty much the best thing in my world right now but they are pretty scary for George because he is already thinking of Abbey and boys! She gives a kiss with her mouth wide open and occasionally sticks out her tongue. George has already threatened 5-year old Owen who lives up the street. George told Owen (after he was playing with Abbey one night) that he wasn’t allowed to be near our house and that George was watching him. Owen of course wasn’t thinking about Abbey the way George was eluding so Owen responded with, “you aren’t being very nice.” Too funny! 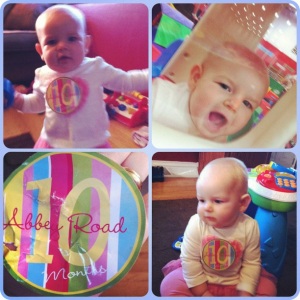 Now that Abbey’s interest in crawling has decreased and the interest in walking has increased there is now way socks are lasting on her feet for long periods of time. When she is home I don’t mind as much and love watching her toddle around barefoot but what do you do when you are out? I don’t want her to be barefoot at a restaurant or other public places but do you just use socks and if she wants to get down and walk you let her do it in just the socks? The germ-a-phobe in me is slightly freaking out about that thought right now. Any ideas here would also be helpful.

9 thoughts on “10 Months Old and Walking”