I was just looking at my last blog post, woah! There has been so much change in my life since mid-March that I almost feel like a completely different person. Too much to tell you about so I’ll have to give the highlights: 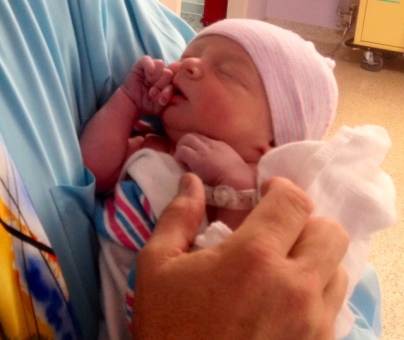 March 25th – gave birth to one adorable baby boy, Jack Edward Herron at 8:04am thanks to the amazing Dr. Caligaris. Jack weighed 7lbs 7 oz and was 19-3/4″ long. Big sister Abbey was a bit nervous about seeing mommy in a hospital bed but was a big help right from the start. Jack and I stayed in the hospital from Tuesday morning (5:30am yuck) till about 10am the following Friday. Jack left the hospital a bit smaller than when he was born but all the nurses and doctor felt that he was doing fine because he was nursing so often and having many dirty diapers… MANY!

We were thankful for the visitors and sooooo many people loving on both my babes while we were in the hospital. So thankful for all the help that we received, it would not have been such a smooth and enjoyable experience if it wasn’t for all of our friends and family.

April 7th – we closed on Willfleet and sold our house officially then a few hours later we closed on Keehner Ridge and bought the house of our dreams. THEN one hour after that we started on the many projects that needed to be done before we could move in. 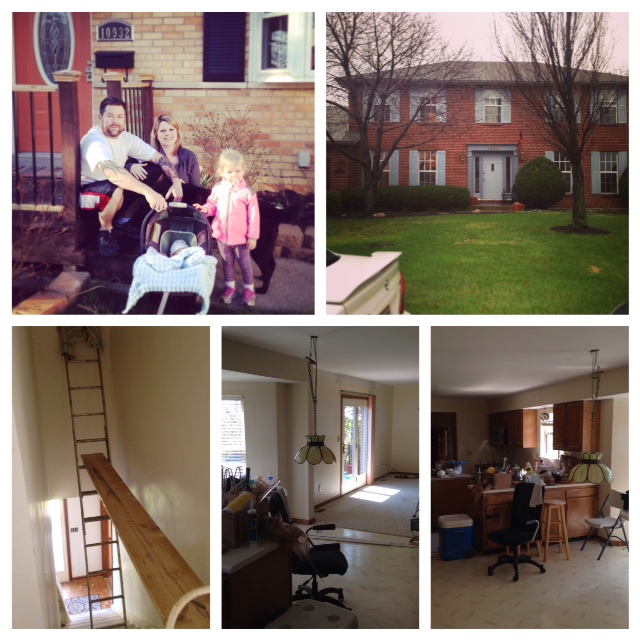 Believe it or not, we were moving in and actually were able to sleep there only three weeks after the construction started. The team of help was amazing and 100% overworked. George, Mom, Dad, Scrooge, Kathy, Big Guy, Sandy, Bill, Mrs. B, Paul, Rick, Grandpa O., Uncle Tom and Aunt Teresa are all amazing angels! Can’t wait to have them all over for steak dinners one night (when we are more settled in).

Then there was Abbey, Jack and me living at Scrooge’s house – George basically just slept there – while recovering from the c-section. Sprinkle in Easter, more construction at the house, and then move-in weekend. 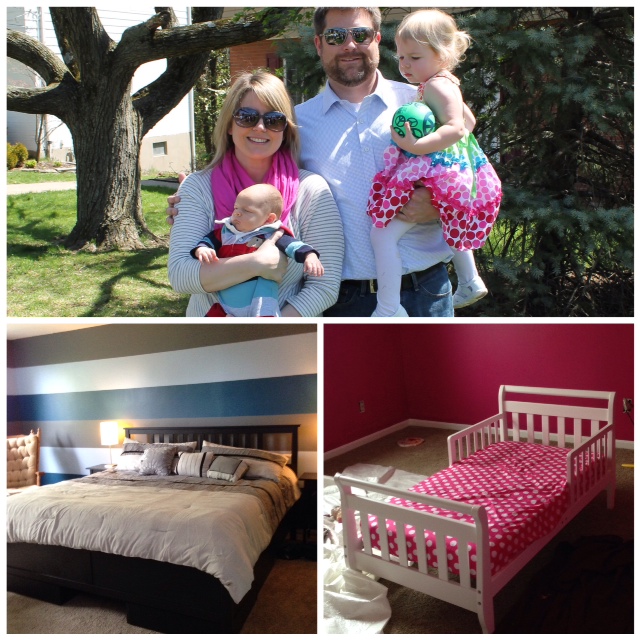 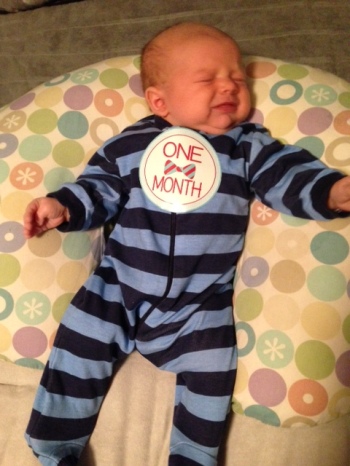 April 25th – Jack is one month old and weighing in at a whomping 11lbs 4oz (77%) and measuring 21.25″ (25%). So basically our baby boy is short and very stout, haha. I was ecstatic for the weight gain especially since he was only 7lbs 4oz at his first check up which was only 6 days from birth.  I remember Abbey being on the opposite spectrum at this check up. She was longer at this point and was more in the 75th percentile for her height and about the same for her weight. Abbey’s chunk was more distributed and Jack is just very round in the face and belly, poor baby has some serious chicken legs like his daddy. He just felt like a different baby than Abbey but I still very much see many similarities in their face. Many of the same expressions and of course they both love mommy’s boobs, haha!

Between Jack’s one-month appointment and two-month appointment there were many awesome things going on all at once. More painting and construction at Keehner Ridge including Abbey’s new swing set for the backyard, hosting our first family party – Mother’s Day, finishing Abbey and Jack’s play room, and just getting more and more settled in to the new house. We were able to have some fun with a stop to the zoo one day and a stop to the Butterfly exhibit at the Krohn’s Conservatory with Aunt Sue and Beth. We seriously picked a perfect day for the Butterfly show so we decided to hit up Washington Park and toured OTR for Aunt Sue.

Work has been really busy, which is a great thing, so I headed back a bit early to get on top of some projects that were calling my name. It was much easier leaving Jack than it was with Abbey but I sure do miss them both when I’m gone. Abbey has really enjoyed her time with me and I have been so blessed to see her grow in this fun age. 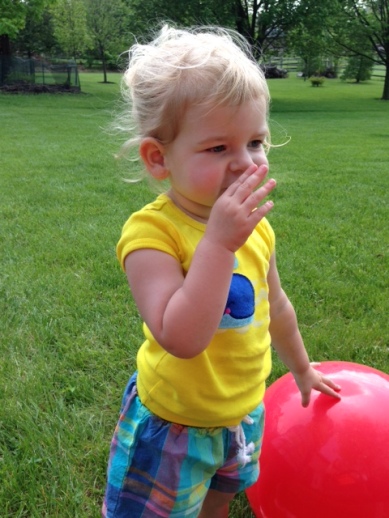 Just this past weekend we were at Fox Run and it was so fun to watch Abbey run around and dance and play with all the big kids. She is certainly a big personality and demands quite the attention when she is in a big group, not exactly sure where she gets this, haha! We spent my birthday and Memorial Day weekend in Brookville and we seriously could not have had a better weekend. The sun and fresh air was a perfect get away.

Whew, I think that just about catches up to speed!

May 22 – Abbey is 2.5 years old, we don’t celebrate 1/2 birthdays but we did just recently watch Alice In Wonderland so we did some “un-birthday” celebrating instead! We were able to weigh Ab while we took Jack in for his two-month check up and she is 29.75 lbs. No measurement on her height but she seems more big-kid looking to me these days versus toddler so I’m sure she has grown!

May 25 – Jack is two-months old and growing like weed! I should count his rolls next time he is in the bath tub as I clean in and around each one….the boy is huge! Jack now weighs 14lbs 9oz (91%) and measures 24 inches (88%) and I’m crossing my fingers that he also finds his daddy’s height versus being challenged like his momma. Jack is really starting to develop a personality with lots of cooing, smiling and even a small chuckle. He is entertained and not phased with Abbey all at once and really recognizes when I speak to him. Of course he does, he is damn near 15 lbs so he really knows who I am! 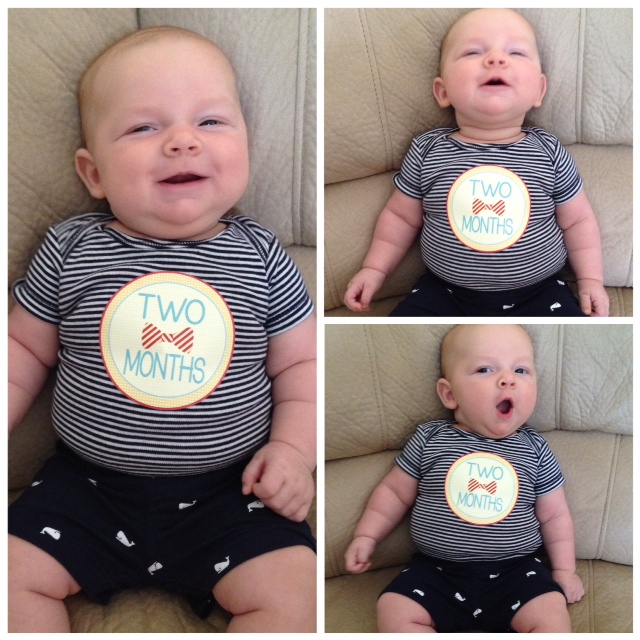 As a comparison to Abbey at 2 months old – she was only 13lbs 2oz and 23 inches long, can you believe she was smaller? I just remember thinking how huge she was when she was a baby so this little boy is really looking like a bruiser compared to Ab. Here is Abbey’s 2 month post for just a little trip down memory lane.

Thanks for bearing through 2 months of posts with me, I hope to stay on top of these in the future with updates for both Ab and Jack but as most of you know it is straight up redonk around here so no pinky promises!