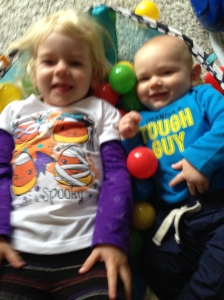 Oh he’s tough alright, about knocked a momma OUT!

As I was driving into work this morning I began to reflect on another Herron-crazy weekend. This is something I do most Monday’s since we tend to have intense weekends and it is nice to remember all the fun moments and even the stressful ones too. So there I am driving down the highway and I’m remembering the many times I was hurt by mini-humans, not emotionally but PHYSICALLY hurt!

There was the moment that Ab decided to do one of her little games called, “Bonk” where as you can imagine she bonks her head onto my head. We were watching a movie and she bonked a bit too hard and totally missed my head but instead rammed her thick skull onto my cheekbone, ahhh! You know the feeling when you are jarred and then all of a sudden your eye starts to water, yep, that was me. I tried to not lead on too much of the pain as I didn’t want her to feel too bad but there was a mini scolding going on and quite frankly I didn’t like playing that game anyway.

My little boy isn’t so innocent either! Not only did he keep me up just about every 1.5 hours on Saturday night going into Sunday (which in itself is more pain than I like to endure) but then Sunday morning the little stinker whacked my face with one of his hard plastic toys. It took some serious self-preservation to not yell a massively loud cuss word at that moment. Instead I did snag the toy and chucked it across the playroom in hopes that it would bury itself deep into the never ending land of toys and hopefully will not rear its ugly plastic monkey head again. Damn you evil monkey toy!

One of my last physical beat-downs from the kiddos came after a nice little jaunt to Station Road farm late yesterday afternoon. After coming back from picking out a few pumpkins to get our decor going for the outside of the house, Ab and I decided to rake leaves to put into a bag that looks like a pumpkin when all full – you know what I’m talking about. I’m raking leaves and using the doodads that look like massive tongs to pick up said leaves and Ab is holding up the pumpkin bag for me to dump them in. She was okay for this a few times but then decided she had to help me with the raking. Love me some toddler help and gladly handed her the rake. WHAT THE HELL WAS I THINKING?!?!?!? I literally handed her a weapon!! Not only did she try to rake off my foot but the end of the handle was also jabbed into my temple. Stars, under-the-breath curse words and more teary eyes all with a ginormous “mommy-smile” on my face.

I’ll be honest, as I sit here at lunch recapping these events for blog-world, I’m so damn lucky to be alive! Whew, a bit bruised up and sore but alive! I wonder how many physical ailments Mr. Herron endured this weekend from our sweet and innocent kiddos?

Sweet and Innocent my @$$ but oh-so-cute

6 thoughts on “Beat Up By The Mini Humans”